Saturday was indeed a festival of textiles! The Eastern Region of the Embroiderers’ Guild held a wonderful day at Oakland College, St Albans. We were treated to two speakers with very different experience in the world of commissioned embroidery. Diana Springall, whom I had particularly wanted to see, told of a few of the major pieces worked during her 50 years as a professional. One of my favourites, talked about though not illustrated, is in the library at Sheffield University. The sense of movement she instilled in the design still excites me. 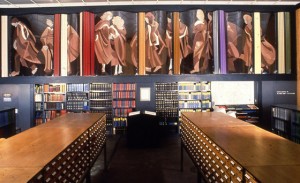 Interestingly she said she had a preference for commissioned over self-generated pieces as she knew they wouldn’t end up in a cupboard. 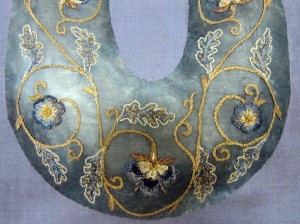 Michelle Carragher’s name meant nothing to me; I couldn’t recall seeing any work by her. Oh, but I had! She embroiders clothes for Game of Thrones. What a treat! Beautifully crafted samples to look at, slides of the characters stunningly dressed and fascinating insight into the thought and stories behind the choice of colours, content and technique. 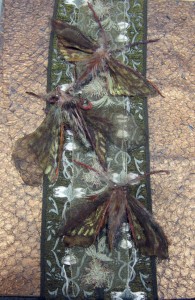 The whole day had been meticulously organised by the Hertfordshire branch  and there was plenty to look at with wonderful examples of embroidery and some really tempting traders. I enjoyed the fact that many other textile focused organisations were there as well – felting, spinning, knitting, lace making – it made for a very varied and intriguing day. The lunches were really good as well, as were the cakes, so thank you to Hertfordshire branch.