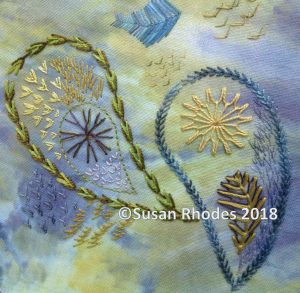 I wanted to demonstrate to a group the almost limitless possibilities of a simple embroidery stitch. A perfect excuse to indulge in one of my favourite activities – playing with colour thread and fabric. I used a piece of my snow-dyed fabric, working with that colour palette and chose fly stitch. It’s a basic, simple loop stitch and I think that often the simpler the stitch, the more you can do with it. Everything (except one back-stitched outline) in the as- yet unfinished sampler is a variation of fly stitch. Interestingly, the twisted version (on the left) looks just like twisted detached chain, and it is! Detached chain stitch and fly stitch are worked with exactly the same movements, the former has both ends of the “loop” into the same hole, the fly stitched doesn’t. 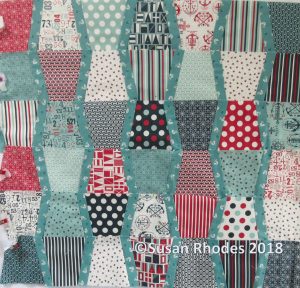 Progress is being made on a small quilt, too. I’ve had a charm pack lurking in a drawer for a couple of years now, I was determined to use. I found the traditional ‘Tumbler’ block and realised this shape would waste very little of each square. I used remnants from making a grand daughter’s dress to sash one side of each piece and loved the zigzag that appeared. Here are the completed rows waiting to be stitched together. Every charm square used and I really like it! 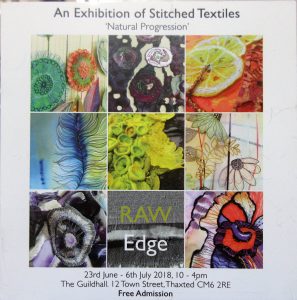 I went to an exhibition by RAWedge at Thaxted. An absolute delight. Not only were the six artists’ finished pieces a joy to look at but their sketchbooks were accessible. So fascinating to see that they had gone through the same processes (via workshops with Mentor  Alex Waylett) and yet produced completely personal work. 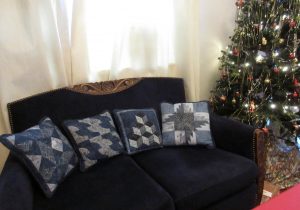 Several years ago, as part of my City & Guilds course, I made several patchwork blocks in a range of blue / grey batiks.  As I was a beginner each block took a long time and although I was enjoying the process I didn’t really want to invest the time in ‘just’ samples to sit in a drawer.  I did each one as a fully backed, quilted piece with the vague idea that I could make more and create a quilt. Well, time moved on and I made no more blocks.  Also when I put them together I didn’t really like the effect as I had created several different sizes!

Fast forward to a couple of weeks ago – preparations for Christmas and the realisation that I needed new cushions for the sofa. Coincidentally I was going through some drawers in my workroom trying to find space for yet more ‘essential’ pieces of fabric.  I found the blocks, I gained drawer space and new cushions. Result! 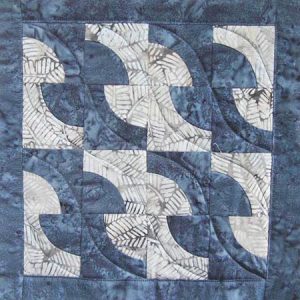 I wanted to pipe the cushion covers because I think it gives a better shape and fortunately I had enough of the dark fabric for all the backs and piping so they look like a set despite being different designs.  I was once again thankful I’d invested  in a piping foot for my Bernina. Actually it isn’t the one marketed as a piping foot, which is number 38 and has a raised right hand side.  I like number 12 which is described as a bulky overlock foot and has quite a deep groove underneath which sits neatly over the cord and works a treat. I used to use the zipper foot but it never quite did the job well. 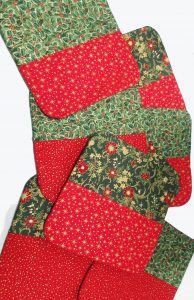 I do like Christmas preparations! This year I changed the colour scheme of The Table and made a set of place mats with cheerful green, red and gold seasonal fabrics.  I just cut squares in half and matched green with red, used insulating wadding and backed them with more glittery goodness. 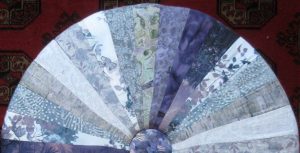 I have covered a tuffet!  I went to a great class with Linda Chevin Hall at Bramble Patch and now have a beautiful footstool.

A friend of mine went a couple of months ago and said she had such a good time I was determined to go myself; she was quite right, it was a very enjoyable day.  We needed thirty strips of fabric and I wanted to use up some of my stash, not buy a new jelly roll or yet more fat quarters.  In the end I used mostly my material with just a couple of beautiful additions from the wonderful range at Bramble Patch to complete my colour palette. 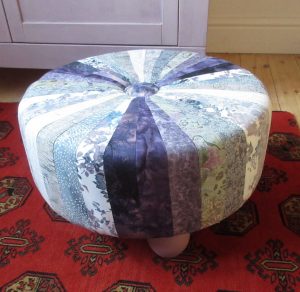 Linda seemed to effortlessly have loads of time for each of the ten in the group and was especially helpful with colour sorting.  I based my scheme around the colour of a painted cupboard in the room it was destined for and my husband painted the wooden feet with some chalk paint fortunately left over.  I love it. 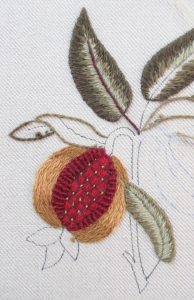 It’s September, it’s definitely autumnal and the teaching term has started!  My Wivenhoe group asked to get involved with crewel embroidery so we started from basics and everyone has their own project in mind to finish (?) by January. 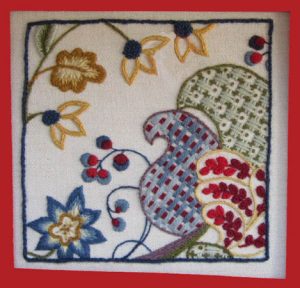 I decided I would work a small piece alongside them and treated myself to someone else’s design so I could jump straight in.  I chose Sue Hawkins‘ Pomegranates.  This one of her kits is just right for me because it uses several of exactly the same colours as a cushion I have already worked, so will sit well with that. That earlier one was started in a Philippa Turnbull class and is part of her Levens Hall Pillowe design (which I can’t now see on her website but there are other wonderful designs). Apparently I worked this five years ago – seems like yesterday! Sue uses a stitch I haven’t come across before.  The one down the sides of the open part of the pomegranate.  It’s worked the same way as whipping over the spokes of a spider web but done on a ladder of straight stitches.  Very effective. 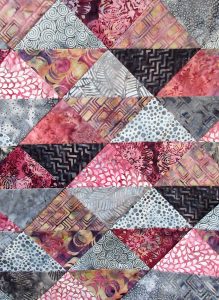 I’ve also made progress with my bed quilt. I showed a picture way back in May of a couple of rows.  Then I didn’t get to working on it much over the summer.  This Saturday I took all my completed rows and started to seam them together – and this time my points mostly meet!

These feel somewhat like autumnal colours as well (grey for the rain?) and I am pleased with the way they are blending together, a bit more so than in the photo. 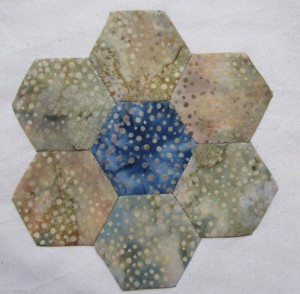 The City and Guilds in patchwork and quilting introduced me to new techniques and one that sparked great enthusiasm was English paper piecing and, especially, hexagons. 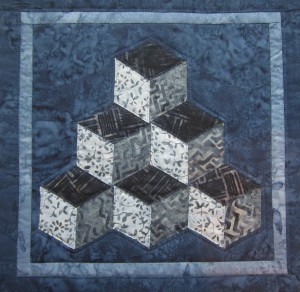 My first piecing was small – just one group of hexagons to make the traditional flower as a sample and although I quite enjoyed the process it seemed a very slow way of putting together bits of fabric.  Next I did a quilt square with tumbling blocks.  Getting the points precise proved a challenge but I noticed how much I was beginning to enjoy the pleasure of picking up the next diamond and stitching. And then I researched hexagon quilts. The potential for pattern! 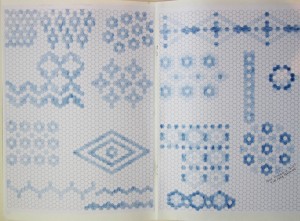 So many ways to use one simple shape to create a seemingly limitless variety of quilt designs.  The personality of each quilt. I was smitten. Not enough to embark on a full-sized quilt (I know my limitations) but certainly enough to base one of my projects on the technique.  I love my work basket. 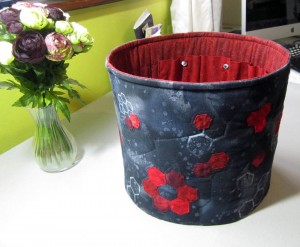 So when I wanted some hand sewing to occupy myself when I wasn’t feeling up to a major challenge I settled on hexagons, cut from a layer cake of traditional prints, to adorn a cushion cover. I am at the quilting stage now, after hours of restorative stitching .  May even have it finished in time for Christmas. 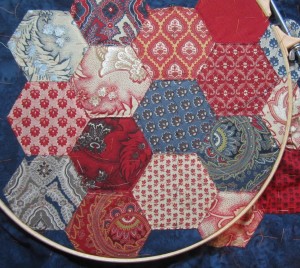